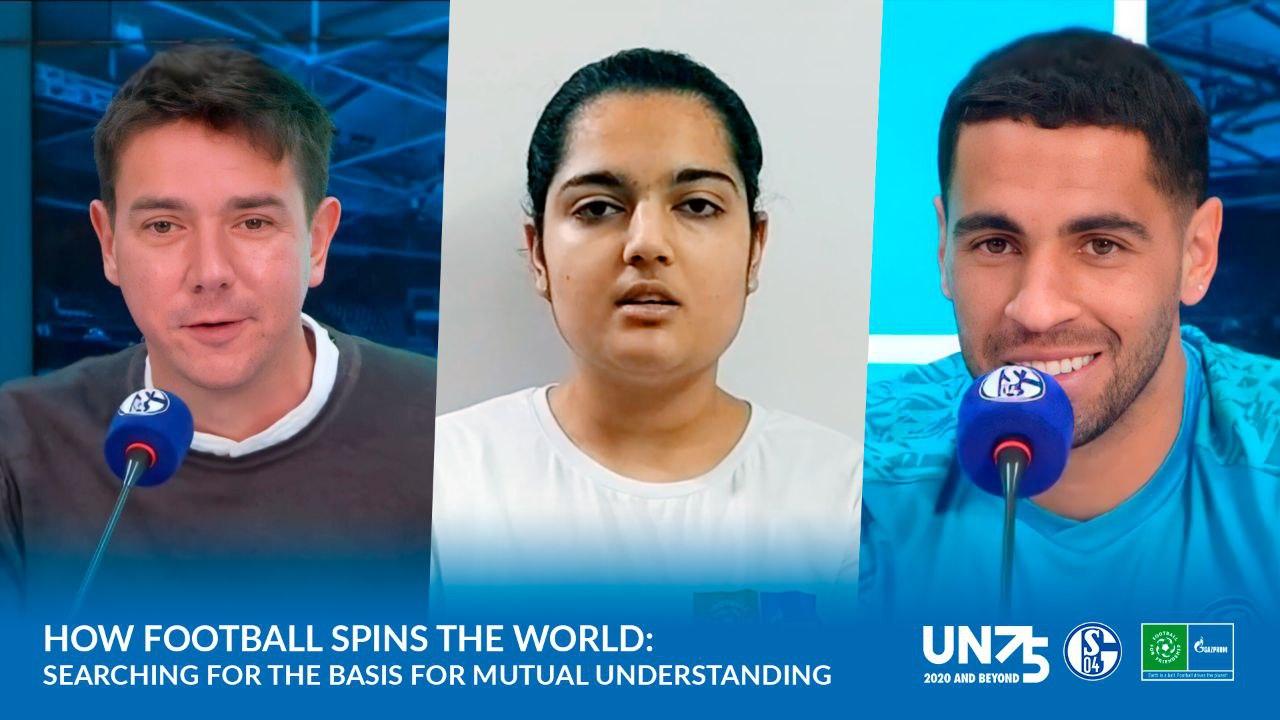 On September 21, on the International Day of Peace, the Young Ambassadors for Football for Friendship and members of FC Schalke 04 held a meeting on the topic “Making football drive the planet: Finding grounds for common understanding: searching for the basis for mutual understanding”. The event became a part of the #UN75 global dialogue conducted by the UN in search of new decisions for global cooperation.

The idea of the event consists in drawing attention of the general public to the urgent issues of searching for dialogue and mutual understanding, the need to live in peace. International Children’s Social Program Football for Friendship launched in 2013 actively helps to overcome barriers and stereotypes standing between various countries and people. Young participants from India, Russia, Pakistan and Sri Lanka shared their ideas on how to make the world better and discussed it with Sebastian Buntkirchen, the Managing Director of Schalke hilft! Foundation, and Omar Mascarell, the Captain of FC Schalke 04.

“I love football since I was a child. I would like to see this remarkable game available to everyone who wants to play football and build career in it. It gives equal opportunities for everyone, regardless of nationality and race, social status, gender, wealth. The most important principles of football are the major principles of mankind. The special understanding of it came to the world in 2020, when the pandemic lifted the values of partnership and empathy to a new level”, FC Schalke 04 Captain Omar Mascarell notes.

“I have been participating in the Football for Friendship programme for three years already. There play football and try ourselves in journalism, but it is not the most important thing. We communicate, find new friends, share our emotions and ideas. We learn and show by our example how to build relationships, what values to focus on and how to live in peace together», the Young Ambassador from Pakistan, 15-year-old Yusuf Moazzam says.

International Children’s Social Program Football for Friendship is implemented by PJSC Gazprom since 2013. During the past seven seasons, the program engaged 211 countries and regions, united more than 6 thousand participants and got attention of more than 5 million supporters.

The participants of the program – Young Football Players and Young Journalists – 12-year-old boys and girls, including physically challenged ones. Representing different countries and cultures, Young Football Players unite in mixed teams showing that nationality, gender and physical capacities do not prevent from playing for one team. The Young Journalists cover the Program events in the International Children’s Press Center. All participants get the Young Ambassador status, and when they get home, they keep on sharing the experience they got at Football for Friendship and promoting global values — friendship, equality, justice, health, peace, commitment, victory, traditions and honor.

Football for Friendship is supported by UEFA, FIFA, football federations and the world’s leading football clubs, international charity foundations, famous athletes, politicians, artists. The project has been awarded on the international and national levels in the fields of social responsibility, sports and communications, including breaking the world record in the most multinational football training session in history.

In 2020, Football for Friendship will be held online. The special digital platform will unite more than 10 thousand players of all ages and make the base for international children’s competitions as well as the playground giving opportunity for everyone to train, play in mixed international teams or play their favorite game from home, in the Football for Friendship format.